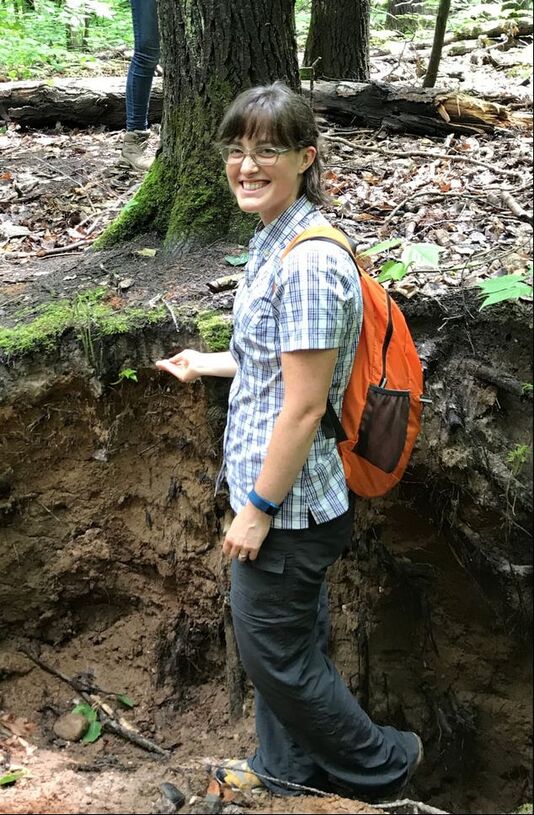 4. Forest Ecosystems In Responses To Disturbance 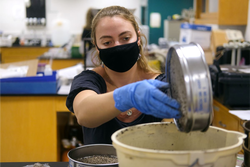 Catherine engaged in the art of soil sieving in the BIogeochemistry Lab. 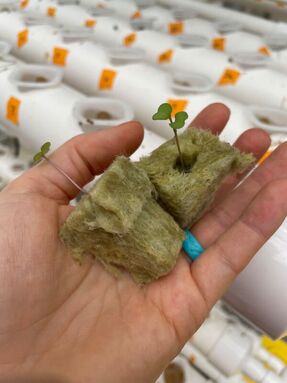 What does microbial community development and assembly look like in hydroponics systems?

This Wisconsin Space Grant funded research set out to examine the Differential effects of artificial soil growth media and crop cultivation on microbial community development and functions in hydroponics systems.

​Here you can see tiny kale sprouts in rockwool, a whole system in the pakm of your hand! 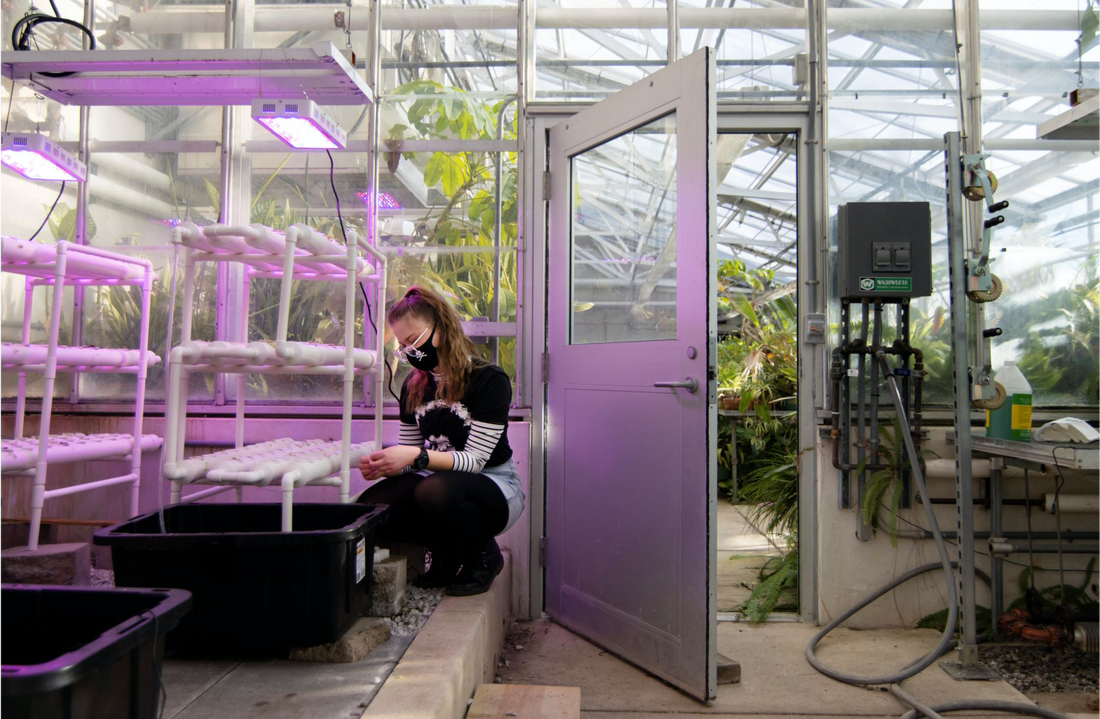 Sophia working on assembling the experimental hydroponics manifolds.
Forests For Nature And Society-FONASO

My dissertation research centered around tree species interactions with nutrient cycling, carbon sequestration, soil communities and decomposition. I was a FONASO fellow and my research improves our understanding of how nutrients are cycled in temperate and boreal forests, and how to link functions to processes. I researched Single Tree species and mixed species effects on nutrient cycling in experimental forests in the United kingdom, denmark, and Canada. I also researched Root growth and carbon allocation in single tree species versus mixed species experimental plots (see the mini-forest research). 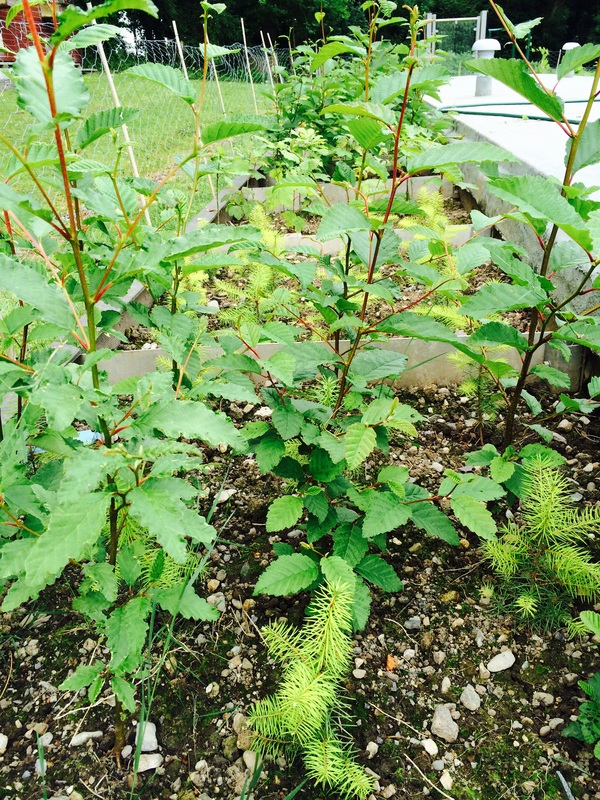 Mini-Forests Experiment
​
In the spring of 2014, I established an experiment at the Treborth Botanic Garden Rhizotron. A rhizotron is an underground laboratory that allows soil sampling access without disturbing the trees above. I planted tree seedlings in single and two-species mixtures within the various soil compartments at the rhizotron. On the right is a photo of the bare soil compartments. Below is a photo of the Mini-Forests at the Rhizotron this past autumn, showing the successful establishment of the 4 tree species and 0% mortality rate! This work was presented at the British Ecological Society Plants-Soils-Ecosystems conference in 2014. Paper in Review, watch this space! 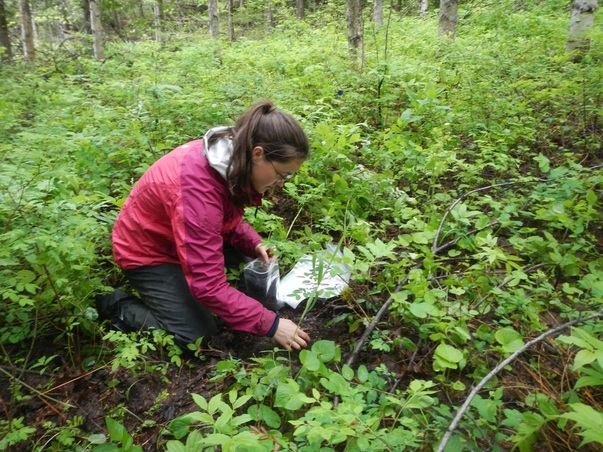 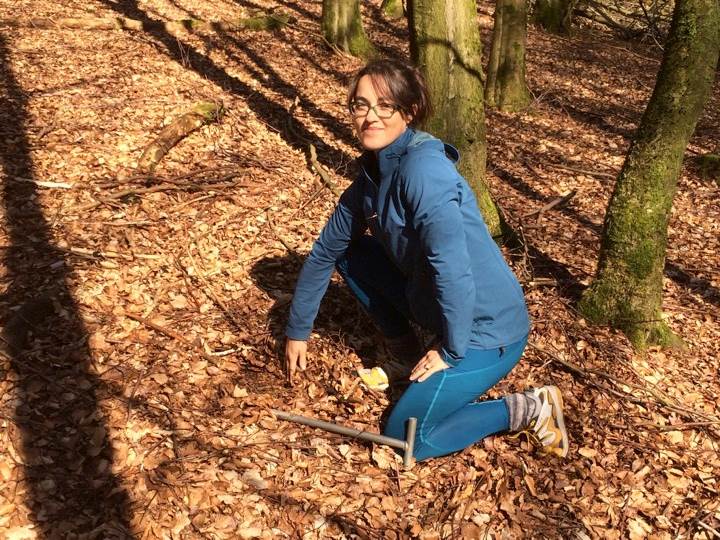 Together With Cindy Prescott And Sue Grayston, I Am Exploring The Role Of Tree Species Identity In Nutrient Cycling In Pure Species Forests (Grown In Common Garden Settings). A great deal of laboratory guidance and general knowledge was provided by David Levy-Booth during these projects. In the Summer of 2014, I Conducted Field Sampling In The Forests Of British Columbia In Collaboration With The Belowground Ecosystem Group In Forestry At UBC In Vancouver. This Research Is Conducted At An Experimental Forest In Interior British Columbia, As Well As Experimental Forests On Vancouver Island. Read about this published work in Soil Biology and biochemistry!

Tree Species Effects On Nitrogen Cycling
Similar To The Canadian Field Work From The Summer Of 2014, In This Research Project I Aim To Explore How Tree Species Identity Influences Nutrient Cycling In Common Garden Forests. This Research Is Being Conducted At Experimental broadleaf and Conifer Forests In Jutland, Funen, And Zealand Throughout The Summer and autumn Of 2015, At The Laboratories At The University Of Copenhagen in collaboration with Lars Vesterdal.
Urban gardens and community Compost
Branching out into the related interest of soil compost, i have been documenting patterns in backyard compost bins in the Appleton area. my role in this project was to explore microbial communities within compost bins that have had contrasting food wastes as the primary compost inputs. This project is in collaboration with Stellar Lawrence University student, LIndsay Holsen.

Southwestern Collaborations
Israel Del Toro is the primary investigator
This is a new research program exploring borderlands biodiversity across a latitude gradient in the southwestern U.S. Fieldwork commenced Spring 2015 and involved trekking up and down sky islands in Arizona, New Mexico and Texas. the project will primarily be based at the Jornada Research station/LTER (read more about The Jornada here).
Australia/CSIRO TERC Collaborations

Ant community responses along a precipitation gradient
Israel Del Toro & Alan Andersen
This project aims to determine how ant biodiversity shifts in response to precipitation, which is known to play an important role in controlling species distributions in Northern Australia. In addition to a large-scale field sampling effort along the Northern Australia Tropical Transect we are interested in modeling how species distributions are expected to change given future Regional climate scenarios. Look for this paper soon!

Burning for Biodiversity:
Ant community dynamics in response to experimentally manipulated savannah burning regimes at the TWP, Australia
Alan Andersen Magen Petit & Kate Parr
This research is part of an ongoing effort to sample the effects of fire on ant biodiversity as a part of the Burning for Biodiversity project which has two aims: 1) Improve the understanding of effects of fire on biodiversity and 2) Increase public awareness and education of fire in Northern Australia. Ants have been systemically sampled in the Park since 2003, the first paper on the ants dataset was published by Alan Andersen and Kate Parr in Austral Ecology in 2008. The most recent data and analyses can be Found in our Journal of Applied Ecology paper.
Forests In Transition
Community Responses To Hemlock Decline
I Researched Eastern Hemlock (Tsuga Canadensis L. Carr.) Forest Community And Ecosystem Responses To Hemlock Woolly Adelgid (Adelges Tsugae) Throughout The Range Of Eastern Hemlock In The United States, And At Two Long-Term Ecological Research Sites: Harvard Forest And Coweeta Hydrologic Lab. I Was Interested In How Forests Transition With The Decline Of Hemlock Across A Latitudinal Gradient, And The Cascading Effects On The Ecosystem As Measured Through Changes In Soil Communities, And Nutrient Cycling. This Work Is Currently In Review. A Decomposition Experiment Of Hemlock And Mixed Deciduous Substrates Is Set-Up Throughout The Ant Exclosure Experiment Nested Within The Harvard Forest Hemlock Removal Experiment. This Work is Published In A
Special Issue Of Southeastern Naturalist Focused On Hemlock Woolly Adelgid.

Red Wood Ant Mound Distributions
This Research Project Is A Collaboration With Israel Del Toro, Gabi And Martin Berberich, Nate Sanders, And Aaron Ellison. Israel And I Completed The Fieldwork Of Identifying And GPS-Locating Formica Rufa Ant Mounds Throughout The Jutland Peninsula In Denmark.  Israel Del Toro Is The Lead On This Project, Look For The Paper Soon! The preprint is available Here.
​
﻿Ecosystem responses to hemlock decline﻿-This research was based at the Harvard Forest Hemlock Removal Experiment (HF-HeRE) and explored how changes in canopy structure and ant assemblages influenced soil ecosystem variables like nitrogen availability, CO2 flux, and litter decomposition. This work is published in Ecosphere.

Ants and Ecosystem Services Review- A review paper synthesizing current and recent research on the effects of ants on ecosystem services and disservices.

Long-term vegetation community responses to Hemlock Woolly Adelgid in CT
Harvard Forest REU Program with David Orwig
I spent two summers tromping through the woods with my trusty compass and write-in-the-rain in Southern Connecticut re-sampling a series of permanent plots that have been running for 15 years, with a focus on understory vegetation communities (shrubs,woody vegetation, herbs, and ferns), and overstory tree community and regeneration (saplings, seedlings) of eastern hemlocks. Presented at The Harvard Forest symposium and ESA.